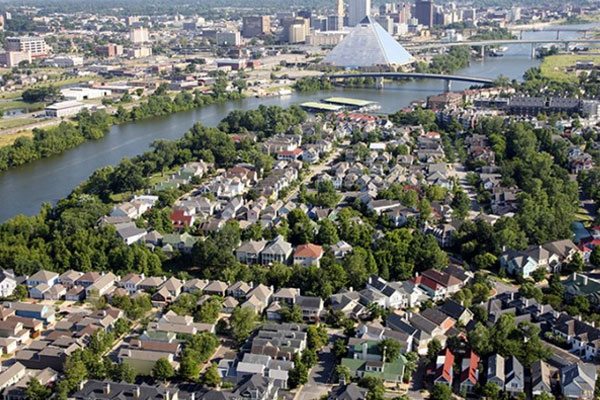 Harbor Town is a new urbanist-style neighborhood in Memphis, Tennessee. Harbor Town sits atop 132 acres on a sandbar known as Mud Island. The neighborhood emphasizes the human, not the automobile, and interaction between neighbors is encouraged. It was the collaborative effort of Memphis native and downtown developer Henry Turley, RTKL of Baltimore, Looney, Ricks and Kiss architectural firm from Memphis and consultant, Tony Bologna. They made a simple book that plainly told "do this and don't do that"- development guidelines that would grow Harbor Town into the kind of community now known as New Urbanism. Today, Harbor Town is dense and walkable, offering traditional row houses, contemporary homes, apartments, shops, restaurants, schools, parks, and a marina. It is much studied by city planners from all over the world. Today the trees are mature, the cars are tucked away into alleys behind houses, the river beckons, and the downtown core is a stone's throw away.

Call or email us if you live in the Harbor Town area of Memphis, Tennessee and you would like to schedule a cleaning services appointment
or setup a time for us to give you an estimate for cleaning services.